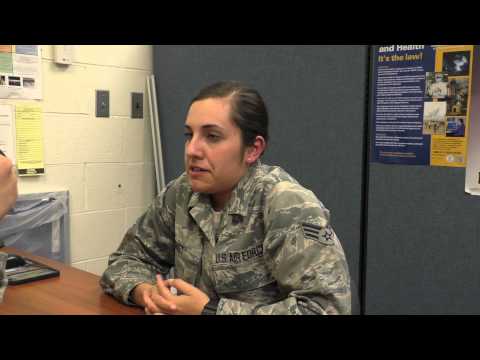 
A resort city known for its casinos, boardwalks and beaches, Atlantic City is considered the “Gambling Capital of the East Coast.” Just down the road from America’s major cities like New York, Philadelphia, Washington DC and Baltimore,   Atlantic City has established itself as an American institution. With such high profile cities in the surrounding area and international notoriety, Atlantic City is in the constant watchful eye of the United States Air Force.
Hidden away just minutes from the coast lay the 177th Fighter Wing; a fully operational Air Force Base which is the first line of defense for Atlantic City and the surrounding area. Many Atlantic City inhabitants have taken the oath to protect and serve their country and community.
Senior Airman (SrA) Taylor Binet, a coastal native, has been with the New Jersey National Guard for three years and based at the 177th Fighter Wing Medical Group.
“I just got hired full-time as a health systems technician here on base so I plan to make a career out of this,” she said.
When it comes to the first responders in case of a natural disaster, which we have fallen victim of recently due to Hurricane Sandy, the 177th Medical Group is readily prepared to support and provide emergency medical treatment.
“I feel the 177th Medical Group has proven itself when it comes to providing combat ready medical personnel and has done so continuously by volunteering for medical missions across the country,” says Airman First Class (A1C) William Sales, a member of the Medical Group who was born and raised in Atlantic City.
Members of the Medical Group, including SrA Binet and A1C Sales, have volunteered their time for Operation Stand Down. For SrA Binet, Stand Down South was a particularly humbling and gratifying experience. Members from the Group provided free healthcare and medical screenings for homeless veterans of southern New Jersey to include Atlantic City.
“Seeing what people have gone through that have served before you and just to be able to bond with them was definitely rewarding,” says SrA Binet.

Posted by AdaptiveAC at 5:26 PM