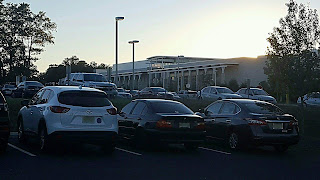 Two weeks ago on Wednesday, March 7th, Stockton kept their doors open and school in session during a nor’easter and state of emergency. Many other affected colleges and universities like Rutgers, TCNJ, Rowan, and Ocean County College made sure to close for the day as well as cancel any activities happening on their campuses. Stockton persisted normal campus operations until 2pm, far past the time many commuters arrive from all parts of the state.

The brunt of the storm hit the area from the time classes started until the school shut down. Stockton’s commuters make up an estimated 63% of the school body, this means that a majority of the students drive from all over the state to get to class every day. A nor’easter could cause treacherous driving conditions for thousands of students. Stockton emailed the students and faculty an alert that the school would close at 2pm. The delayed closing forced commuters to drive back home during peak storm hours of heavy rain, snow, and ice. This announcement came a long time after the state of emergency was declared by Governor Murphy at 8pm the day before.

While many colleges and universities in New Jersey closed due to the impending storm on Tuesday, March 6th, Stockton’s campus surprisingly remained open. A Stockton parent contacted the institution and explained that her daughter spun out on the parkway and had a near-death experience en route from school. A Stockton representative stated that coming to class was at the discretion of the students. The parent of this student said “My daughter had a near-death experience and all Stockton had to say was that they are not liable because she chose to drive to school. Many classes at Stockton require attendance and students get deducted points for not attending.” This is not the first time Stockton has insisted on continuing normal campus operations during hazardous weather conditions, more specifically hurricanes and nor’easters. January 23rd, 2017 and March 2nd, 2018 were two nor’easters that hit the shores of New Jersey hard, leaving thousands out of power and causing severe flooding along the coast.

Two devastating hurricanes that hit New Jersey were Hurricane Sandy which made landfall on October 29th, 2012, and Hurricane Jose that hit on September 19th, 2017. During all four of these destructive storms, Stockton did not close its campus. A Stockton alumni that lives in Ocean County, explained that during Hurricane Sandy, Stockton remained open. She stated “They had classes during Sandy. I had a test in statistics and told my professor that I lived in an area that got hit particularly hard, had no gas, or electricity and the whole nine. He basically told me to be there regardless. You think they would be more understanding considering a large group of their student's commutes. I love Stockton so much, but that made me so mad when I was there.”

Stockton should consider taking more precautions during inclement weather and show more regard for the large commuter population.