Blackjacks Go Bust in Atlantic City, Taking Dreams with Them 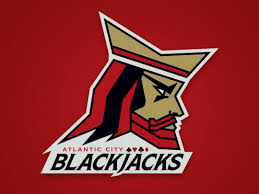 It all started with strong plans. Indoor arena football is something exciting and innovative to bring to any city, but especially Atlantic City. Arena football is rapid-paced with a titillating atmosphere to draw crowds in and keeps that crowd on their feet. Fans in the stands are just off the field with the players and any action that occurs is that much more fun as a result. Throw in running clocks, sexy dancers and booming music to make it a fun-filled time.

The uniforms for Atlantic City were bold red, black and gold, and the team was named as a result of a community competition. In a gambling town, the Blackjacks were fitting. Personnel were in order as well -- the head coach was Ron James, supported by offensive coordinator Shane Stafford. Sergio Gilliam was the defensive coordinator and Brandon Lang the director of player personnel.

The players hailed from around the country, with long and winding paths to the Arena League. Many of the players felt as if they made history by being the first to have a team like this in the city. The closest Arena League team is the Philadelphia Soul, over the bridge and an entire market away. Locals in the area got excited, hyped up really, and many were eager to attend the home opener game to see what this new thing was all about!

In the meantime, preparations continued at Boardwalk Hall. A dance team called the Diamonds was fielded to cheer on the team. Many dancers were from the local area, some from Northern New Jersey and Philadelphia. Momentum grew, and more and more people were benefiting from this team coming to town.

Tons of jobs were created at Boardwalk Hall when the Blackjack rolled into town. The cheerleaders, coaches, behind the scenes support staff, coordinators, concession stand managers, merchandise specialists and more all were bringing home pay checks. The team created partnerships that produced internships, opportunities, and jobs for many. The Blackjack Arena Football Club brought advantages and positive vibes, giving people a bright spot in the community.

In a city of bet big and bust such as AC, this was good news. It offered a live sports game to look forward to each week, a viable alternative to a show at the casino or a movie at the local mall -- the few sources of entertainment locally.

At the home opener against the Columbus Destroyers, the crowd was vibrating with excitement. The energy was so powerful and strong, the hype and happiness as the crowd gathered to watch this first game was palatable. Children were catching T-shirts, fans had already invested in Blackjacks apparel, and a sea of smiles and clapping could be heard as the new team was being introduced and coming onto the field.

Each action packed drive was bursting with emotion and so entertaining no eyes turned from the field.


The home opener was very successful, with a fully packed stadium, and the crowd could not wait for the next game to come. The launch of the Blackjacks went better than expected.

“I think our players were very much pumped for the game,” Atlantic City coach Ron James said. “Just because ….. the history of the building. We talked about it, (but) they didn’t realize just how historic the building was (At first), so it was great to see them react that way.” The football games brought the community together, and the fans were passionate.

Wide receiver LaMark Brown commented after the first home opener that “One of the things that you kind of worry about being a new team is fan attendance… Our fans showed up. They were into the game. They were in tune. They really came out to support us, so it’s a good feeling.”

All of the players and coaches were pleasantly surprised at the success of this first game. This gave a wave of positive energy, and was just what the players needed to hype them up for each game to follow.

Ventnor native Ryan Rothstein, the emcee of the Blackjack games, loved his job. The thrill of the stadium was exceptional. Part of Rothstein’s job was to go on the field and hype the crowd up and get them excited.

“As I walked onto the field, my adrenaline would sky rocket. My job is to get everyone pumped up for the game but with the natural excitement in the arena, it was made easy to do. When I would walk onto the field, the whole stadium was on their feet. All yelling and jumping up and down enjoying themselves. T-shirts and hot dogs were thrown out and dancing and everyone genuinely having a great time. I feel the Arena football league brought all positive to the community and the area of Atlantic City. This was something so new with so much potential, everyone could not help but be excited and wanting to attend these games throughout the summer,” said Rothstein.

He reported that the energy of the coaches and football players was amazing every game. “Regardless if the Blackjacks won or lost a game, the excitement level never changed,” he stated. “I loved this job because everyone was happy, there was no negative. I looked forward to each home game because it brought a positive atmosphere and joy around me.”

Kiante Northington of Louisville, Kentucky was a defensive back for the Atlantic City Blackjacks.

“Joining the Arena team was a great opportunity and I immediately took it. Football is my passion, and I was looking forward to checking out the area and seeing what Atlantic City is all about. I graduated Eastern Kentucky University and then played for the Massachusetts Pirates of the Arena League. This new team was an exciting thing for me, I couldn’t wait to try something new especially knowing its new in the area as well.

Like a football thrown out of bounds, the energy and excitement of the newest AC sports team dropped to the ground with news that came in October. Not only was the Atlantic City Black Jack team folding, but the entire Arena Football League was done.

Unfortunately, the league faced a lawsuit filed by an insurance carrier that provided workers compensation coverage for the league between 2009 and 2012, leading to the Arena Football League closing. Suddenly, the high cost of doing business outweighed the energy of the sport.

“I had high hopes for passionate, excited fans and that’s exactly what there was. It made playing so much more fun and awesome. I also ended up really loving the city of Atlantic City. We constantly did charity work, fun events, and more. It was an overall great experience that I appreciated every minute of.”

Northington stated he will never forget the experience of the Blackjacks team and memories that were made. The team was always doing charity work at Chick-Fil-A, events at Hamilton Mall, and other appearances. All the team players were from all over the country which was very unique and interesting. Giveaways and ticket deal packages were sold to get more people to attend games.

Ron James, the head coach of the Atlantic City Blackjacks said “I played college football at Siena College. I have been coaching since 1986 and always had the biggest love and passion for the sport. My mindset going into this was nervous but determined. I was overwhelmed by the amount of support our team received from the start and up until the very last game. The team became a family very quickly with one another and we just worked. It all just worked. The experience for me was a blast and I enjoyed every minute of it.”

James loved coaching this team and said he was taken aback in a positive way of the amount of love and constant support the community poured out to him and the new team.

The end of the Blackjacks and Arena League Football was disappointing after the successful launch in Atlantic City. It left many shocked and surprised.

The average attendance for their home games was 5,430 fans, and the last two games included 6,685. The team finished with a 4-8 record, but definitely were celebrated by fans and the community. It is not clear where the players, coaches and support staff will head to next, but for one bright and shining season, the Blackjacks landed on black.

Raquel Rothstein is a Ventnor resident who is also in her third year at Stockton University. Raquel is a founder of Sigma Delta Tau Delta Pi chapter at Stockton. She works as a concierge at Marriott Fairway Villas and in her free time loves spending time at the beach and hanging with friends and family.