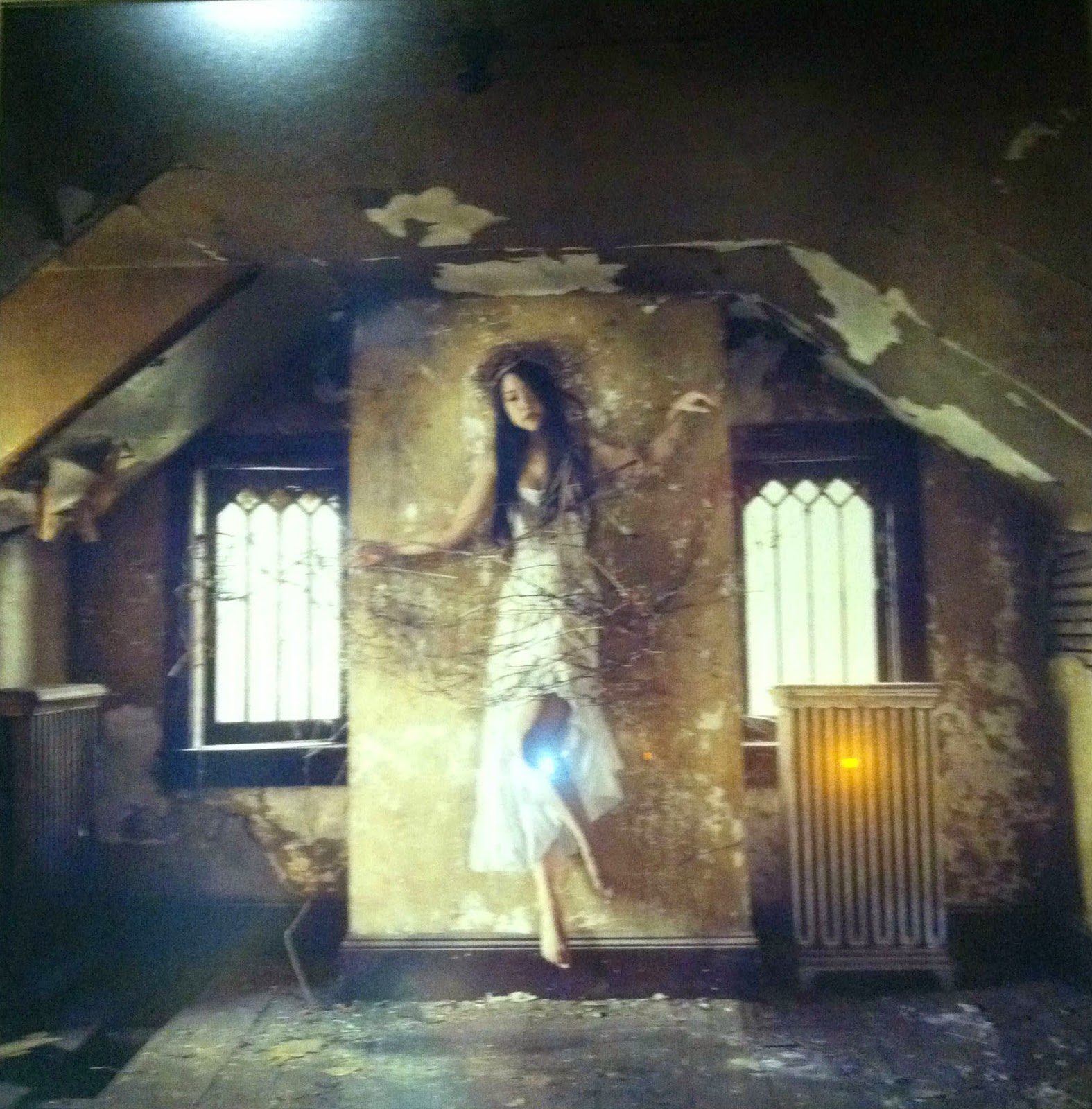 The woman in white is pinned to the peeling wall in the attic of the old home, surrounded by dust, dirt and covered in scathing thorns.  Her delicate and beautiful feet balance precariously two feet off the ground in a ethereal way that leaves the viewer wondering how it was done.

This is “Forsaken,” a portrait by Susan Gietka, which recently won first prize at RAW.  RAW is a juried photography competition organized by The Noyes Museum of Art, now in its third year.  Currently exhibited in the Noyes Gallery at Kramer Hall in Hammonton, RAW focuses on portraits of New Jerseyans in all their diversity and raw spirit, complexity and nuances.

The exhibit features artists from all over New Jersey, both community artists and professional photographers, according to Brenda Kele, Assistant to the Director. Kele annually puts out the call to artists and curates the show.  “Some come from the other end of New Jersey, almost from the New York state border,” Kele recently said, “and some much closer, from right here in South Jersey.”

One of the local community artists, Belinda Manning, of Pleasantville, said she took the photography that made it into the exhibit while watching dancers at a Wheaton Arts and Cultural Center Lenni Lenape Pow Wow in MIllville.  “There were women there dancing, and this young dancer was absolutely beautiful,” said Manning of her photo.  The picture features the profile portrait of a young woman in full traditional garments and headdress, and is a swirl of bright greens and blues.

Manning and all of the other artists paid an entry fee to be entered into the competition, and that money was used to create prizes for the first, second and third place, according to Kele.  In addition, all of the pieces came to the Noyes Museum matted and framed before being reviewed by Bill Horin, a professional photographer who has worked in South Jersey for over twenty years.  Horin, of Linwood,  is the founder of ArtC and the art based magazines ArtBeat and Envision Arts Magazine.

First, second and third prize artists were awarded $300, $200 and $100, respectively, while honorable mentions won ribbons.  “Bill had a hard time with the honorable mentions, and eventually awarded four of them, because he was so impressed with the entire collection and especially those individual pieces,” said Kele.

While hundreds of photographs were submitted from across the state, only 40 were chosen to be part of the exhibit.  The photographs range from color to black and white and include digital composites, snapshots and studio work -- all representing the spirit and splendor of New Jersey. One such composite was Gietka”s piece, filled with warm brown and cream tones reminiscent of sepia photos from the turn of the century.

While the photograph seems to reference Christ on the cross, Gietka refused to limit it to one vision.  She is always interested to hear how other people interpret it, she stated on Thursday night, during the opening reception.  The inspiration for much of her work, she said, comes from ideas or struggles she is working through on her own, making the process both creative and cathartic at the same time.  Depending on what viewers see is how they infer the meaning of her work, making the richly detailed and planned photographs a blank canvas of sorts.

Many of the photographs had New Jersey references and themes, including two that focused on cranberry workers in the bogs and fields.  Another photograph featured a uniquely New Jersey shot -- a Wildwood lifeguard rowing into a wave, clad in a small red bathing suit, every muscle strained to force the boat through the water.  Susan Allen’s honorable mention winning photograph “Horseshoe Crab Tagging,” showed children seeking horseshoe crabs on a South Jersey beach-- all by the last light of a fading moon.

Last year’s winner, Glynnis Reed, of Hammonton, had another photograph included in the 2014 exhibit.  It shows a strong portrait of a young woman, with an overlay of texture that transforms the woman’s face into a pattern of scarring.  Aptly titled “Woman Warrior,” it is a digital collage and archival pigment print.  The young woman stares directly into the eye of the camera -- and consequently the eye of the viewer.

Another photograph that includes a subject looking directly at the camera is “Hub City 3,” a digital print by Stephanie Cortazzo, which captures the urban vibe of New Jersey’s many metro cities.  The photograph plays with the gender fluid qualities of the Millennial Generation in a way that speaks to the audacity and rawness of New Jersey and its abundance of city dwellers.


The exhibit runs through February 8, 2015 and can be viewed for free, Monday through Friday, 8:30-5 pm, at Kramer Hall, 30 Front Street, Hammonton.  For more information or a listing of the purchasing prices of the photographs, check out noyesmuseum.org or call (609) 626-3840.
Posted by AdaptiveAC at 10:57 PM