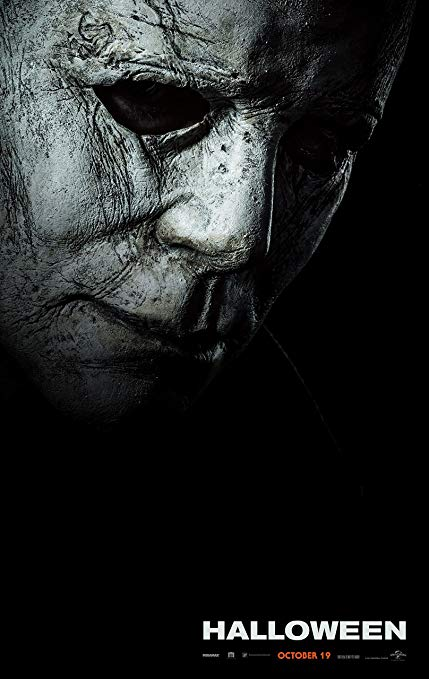 Halloween chilling movie poster with the killer himself, Michael Myers.
Somerdale, NJ --- On Friday, October 19th, of this year, the next chilling chapter of the Halloween franchise movies was released to theaters worldwide. I went opening night with my sister, Kristin, and my dad, to see it on the big screen for the Halloween season. We went to the Cinemark theater in Somerdale, New Jersey.
This is the latest film in the Halloween franchise. This takes places 40 years after the terrors in the very first Halloween movie in 1978. It was directed by David Gordon Green, and he also was part of the screenplay production, along with Danny McBride and Jeff Fradley. The characters and casting were handled by both John Carpenter and Debra Hill. It starred the star of the first movie, Jamie Lee Curtis, who came back as her best-known character, Laurie Strode.
The story is about how Michael Myers escaped the prison bus while being transferred to another institution to be locked away for good. He returns to his hometown of Haddonfield, Illinois to finish the battle with Laurie Strode. He takes the lives’ of anyone in his way to get to his person of interest. Laurie is prepared and has been waiting 40 years for this battle.
I am not a huge fan of scary movies, and I was reluctant to see it. I decided that I should do something scary during the Halloween season and get out of my comfort zone. There was no better way to do that than sitting in a dark room and watching one of the most iconic slasher movies of all time.
I had only seen the first movie, and that’s about it. I never knew that there were so many movies afterwards, so going into this, I didn’t know what to expect. In all honesty, I hid under the hood of my jacket during a lot of the movie, but I did catch the gory details and kills of Michael’s unfortunate victims.
The anticipation of waiting to see what was going to happen and the built-up thrill that was filling up inside of me was a rush. When I thought there would be a nice break to gather my feelings about the previous killing---BOOM! They hit you with another nail-biting scene or an innocent death.
When the movie came to a close, I was still in shock. It definitely took me on a thrilling roller coaster ride. “I actually thought it was pretty good. Better than I expected,” my sister, Kristin mentioned. I agree with that sentence because after thinking about it, it was a well-done movie and the special effects matured and looked more real than the bloodshed in the older movie.
I am starting to become more comfortable with watching horror films. I’d still much rather watch a light-hearted movie over a scary one, but I wouldn’t mind putting myself through the thrill and anticipation it possesses.