Who's Vine Is It Anyway?

Who's Vine Is It Anyway? 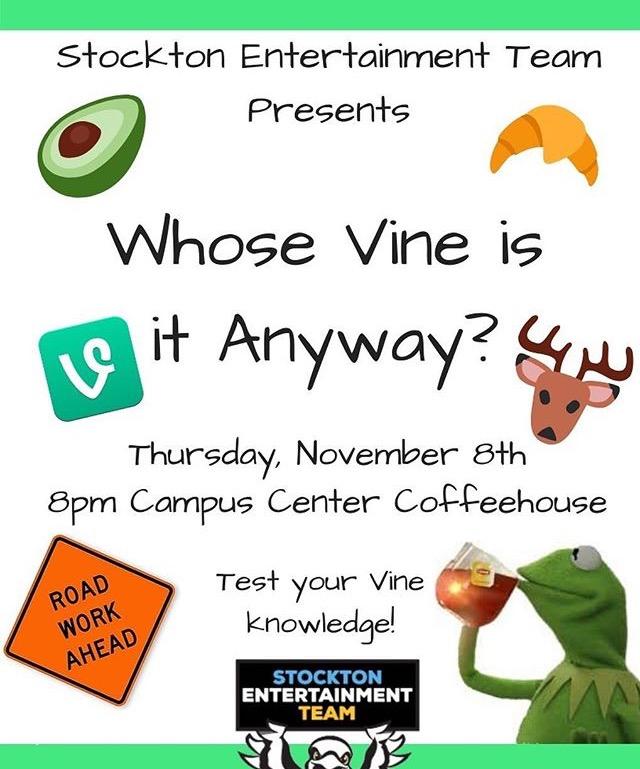 On Thursday night, Stockton University held an event called “Whose Vine is it Anyway?” in the campus center coffeehouse.

Over one hundred students attended this event, as it was heard that money was the grand prize for the winners..

There were three rounds that took place during Vine Night: the first being a much loved game of Kahoot, the second a finish-the-vine assignment, and the last being charades. Emilie Linzan, a contestant throughout the night, claimed that there were too many people and she was disappointed that she didn’t get the experience she wanted. “Using Kahoot sucked, especially because there was a lot of people on one game, I answered one question and it wouldn’t register. I was very upset.”

For the Kahoot game, there were thirty-two teams of four people. For those of you who have never been faced with Kahoot, the object of the game is to get the correct answer from a possible total of four choices in the fastest time out of all the teams or people you are playing with. There is a leaderboard that lists the top five winners after each question which will most likely change after each question. So don’t worry if you don’t see your name at the beginning of the game, chances are you’ll see that name of yours up on that leaderboard for everyone to see.

The second round of the night was finish-the-vine, where each team of four was given a blank piece of paper. The Stockton Entertainment Team, otherwise known as SET, was in charge of the sequential videos that followed, playing only the first three seconds of each vine. The contestants and their team members then had to guess the ending of each vine and write their answers on the piece of paper.

The last round was charades, where each team had to go up to the front of the coffeehouse and one person from the group had to act out a specific vine and the other group members had to guess what it was.
By the end of the night there were mixed reviews from those who attended. Some claimed they had a fun night while others declared they were disappointed. Another contestant named Samirah Barnes says, “I did not enjoy my night, it was very packed and uncoordinated.” If you ended up having fun, good for you! Making the most of your college experience is important in your future so that you don’t have regrets. Make the most out of college, attend events and make new friends, you won’t regret it in the end!
Posted by AdaptiveAC at 12:00 PM