Mia Forbes
Love Combats 11 Acts of Hatred
GALLOWAY, NJ- Candle lights held by Stockton students burned bright in memory of 11 victims of the shooting at a Jewish synagogue in Pittsburgh, NJ on Tuesday, October 30th, 2018 at 5:30pm. The shooting was a devastating blow to the community as many of the lives lost were beloved by many. About 40 to 50 students attended the program to ignite a light in times of sadness, despair, and grievance.
People need each other the most in times of tragedy as it acts as a reminder of how precious life is. Not only did the Jewish community band together to provide love and support, but many other cultures and nationalities joined in as well.
According to Stockton student Elizabeth Rivera, “It doesn’t matter if you’re old or if you’re a kid, our purpose in life is to bring love and peace to the world.”
The amount of love and support that was shown during this event was remarkable, and although the event itself only lasted for about an hour the effects of such a supportive event would last much longer. There was a point in the program when everyone began to sing the musical hymn of “God Bless America” then fell into a moment of silence with their ghost white candles flickering in the dimming light. It was an astounding sight as the community came together. 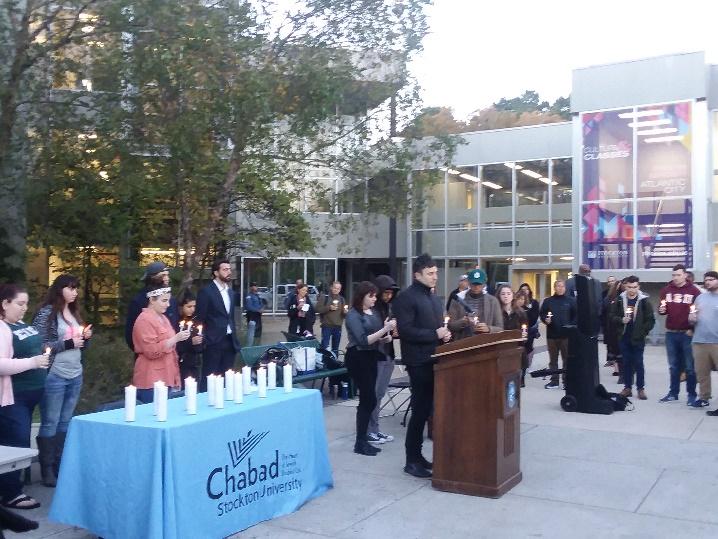 A primary message that was heard throughout the program was spread light in time of darkness to friend, family, and strangers. To be kind, helpful, loving, and supportive to one another and combat these acts of hatred. As simple acts of kindness can go a long way.
Rabbi Meir Rapoport explains to the audience how often opportunities to be kind pass each other by everyday through telling a biblical story regarding a woman named Mrs. Goldstein. Mrs. Goldstein expected God to visit for an evening dinner through a dream, but as she was cleaning and preparing she had two other visitors knock at her door. One was a young boy who had scraped his knee from riding his bicycle and searched for help taking care of it. While the other was a woman who searched for insight and advice as she was struggling with her relationship.

Turning both visitors away, she waited and waited then soon began to cry. God had not come to visit her that evening. The woman fell asleep and in her dreams she saw God and asked, “God, what happened? I’ve been waiting for you.” And God replied, “I’ve come to your door twice and you

had turned me away.”

According to Rabbi Meir Rapoport, to try to prevent these hateful crimes “our response must be an increase in acts of love and kindness.”
The idea is that by spreading more love and kindness, it would be less likely that such hateful acts would result. This is not limited to the Jewish community but applies to all communities out there. We must not resort to violence to combat such hate, but rather turn to love, kindness, and support.
=30=
Posted by AdaptiveAC at 12:30 PM