Where Does Stockton Stand on Cannabis Usage?

Where Does Stockton Stand on Cannabis Usage?


Galloway -- It is no secret that there is now courses offered in the study of Cannabis at Stockton University. As students quickly fill their schedules with these courses, the demand to be put in these classes is clearly very high. With most agreeing that recreational use of marijuana becoming legal within the next couple months in New Jersey it is no surprise that there is an influx of job opportunities and small businesses that will be appearing in New Jersey and the addition to the new courses and minor that is offered certainly shows that Stockton is also getting involved with the literal and figurative growth of marijuana.


However, one question has come into many students minds; “Will I be able to smoke on campus?” is repeated a lot when the topic is brought up and the answer may not be as clear as it seems. Even with medical cards it is still technically illegal to use marijuana and have paraphernalia on campus. In fact, as of 11/5/18 there have already been twenty one arrests on campus for “possession of Marijuana” and eighteen arrests for “possession of paraphernalia”.


The laws of a medical marijuana card allow the holder the ability to smoke marijuana wherever one is allowed to smoke a cigarette, but on school grounds it is police protocol to detain and arrest anyone caught with the substance. Many have called out the hypocrisy that the school has regarding marijuana, and are unhappy about the current rules regarding having it on campus. A student that chooses to remain anonymous said “This is my medication, if I do not use this then I get constant anxiety and panic attacks. The school claims to be very proud of the mental health of the students and the many resources available to help them but little do they care about me having to leave campus just so I can take my prescription.”


Stockton University has these regulations is due to the fact that marijuana still remains a federal crime. Thus, it could cause problems with many students that are caught with it that rely on financial aid. Many Stockton students rely heavily on the federal aid that they are granted and getting it taken away for something like marijuana is definitely possible so the university made its own rules regarding the usage and ownership of marijuana to completely prevent this type of thing from happening.


The student support is still majorly tuned towards the idea of allowing marijuana to be smoked on campus and the coming legalization of marijuana may assist in the changing of these rules. 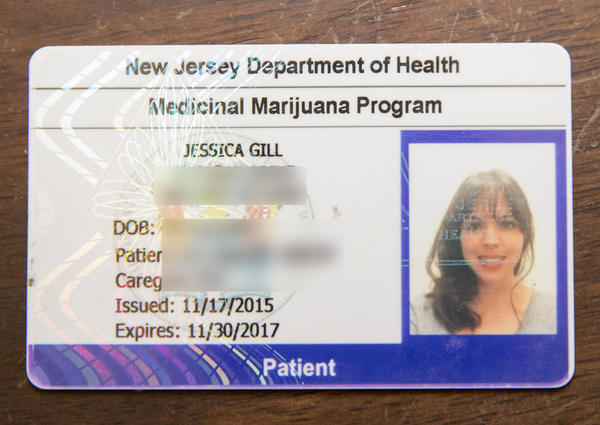 Example of a New Jersey Medical Marijuana Card
Posted by AdaptiveAC at 6:00 PM