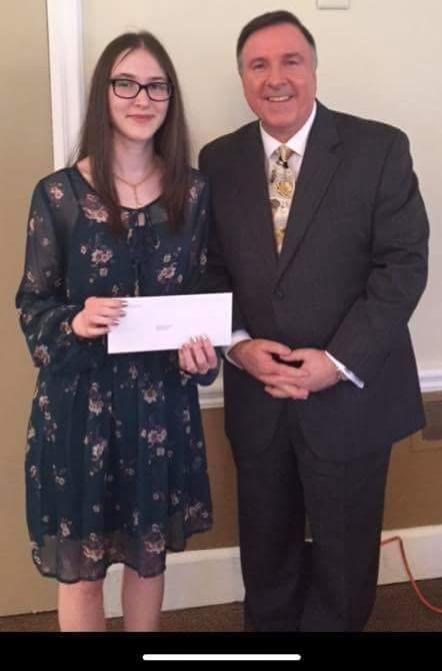 Shannon Joyce is a junior at Stockton University, majoring in Communication Studies with a concentration in Media Production. Shannon is also a proud recipient of the 2018 Broadcast Pioneers Scholarship. “The Broadcast Pioneers of Philadelphia are basically historians of radio and TV in the greater Philadelphia area. They are the largest organization of that type in the world.” She detailed about the organization, who have well over 500 active members in both Radio and Television Stations in the area.
Joyce went on to state, “They raise money every year to give away scholarships to students who are interested in similar work. “She can personally thank Harry Hurley for making her scholarship possible.  Harry Hurley is a nationally recognized talk show host based in the local area. He does a charitable golf outing annually that underwrites for one of the scholarships each year. “He dedicates it to a Stockton Student.”  With this year’s being honored to Shannon. It’s no surprise either, as she is a dedicated student going for her bachelor’s degree. Currently thriving with a 4.0 GPA, Joyce also adds to the Stockton Community as an Argo Staff Writer. “I have been sending something in almost every week”.
This year, The Broadcast Pioneers of Philadelphia raised an impressive total of $20,000, giving out $1,000 to twenty total students. “A couple hundred applicants applied.”  Joyce informed furthermore adding “I was totally shocked in all honesty” when discovering that she was one of the twenty to be praised for her work. Joyce detailed what the application status for this scholarship was like. “They have you send in your actual transcript because they want to see your GPA and the classes you have taken. They were looking for students in Communications, Journalism, or Broadcast, or anything similar to that.” Questioned on what this meant to be one of the few receiving this scholarship, Joyce opened up, “It means a lot because besides sending in our transcripts, we had to send in a 300-word essay. It meant a lot that professionals sat down, read my essay, and actually thought it was worth a $1000.”


When asked where her journey in the field all started, Joyce when on to explain, “When I first started at Atlantic Cape, I was a Media Studies major. I did like that, but what I kind of found out along the way was that I wasn’t a technically kind of person.” Finding her way, Joyce said, “I realized that I am more into storytelling and writing, that’s kind of my niche.” She expects to continue on in the future doing this, “Right now I am looking at journalism. I really like the idea of advocacy work, like telling other peoples’ stories, like LGBTQ stories, women’s rights, all those types.” When it came to what motivates her in journalism she answered, “My favorite kind of story to tell is a profile. People out there have really fascinating stories and really fascinating backgrounds, and personal stories that are worth sharing. What motivates me is being able to hear those personal stories and being able to write them down on paper where other people can hear those stories.” Shannon Joyce is a prime example of a successful college student pursuing her goal, along with making her University proud.