A Run Down of WoodStockton 2018
By Carly Caporrino

This past Friday, April 20th, Stockton University hosted its annual Spring concert, WoodStockton. This year’s voted artist were the All-American Rejects. The event was orchestrated by Stockton’s Entertainment Team, also known as S.E.T. the concert was held on campus in the university’s Sports Center, Big Blue. Doors opened at 7 p.m. and the show started at 8 p.m. There were two opening acts, one of which were Stockton students themselves. The band ‘Alton’, consisting of four Stockton freshmen,  performed for the crowd including a cover of the popular song ‘I Write Sins Not Tragedies’ by Panic! At the Disco. The second opening act was Keelan Donovan, a solo, country/folk artist who performed with only his acoustic guitar. Donovan sang a few of his original songs. At approximately 10 p.m., the All-American Rejects took on the crowd and performed all of the fan favorites and top hits including ‘Dirty Little Secret’, ‘Move Along’, ‘Swing, Swing’, and more. Their energetic and lively performance definitely kept the crowd alive and having a good time. The concert ended roughly around 11 p.m.
Jack Maniscalco, a freshman a part of Stockton Entertainment Team, shared his thoughts about how the event turned out and his first WoodStockton a part of S.E.T, “I think it was very successful and it ran a lot better than expected. The All-American Rejects aren’t that popular as they were years ago, but they pulled off a great show and everyone seemed to love it. I’m glad when people look back on this concert I can say that I was there and was part of making it happen”. Overall, WoodStockton was a success and will continue to be an event that all Stockton students can come together and enjoy! 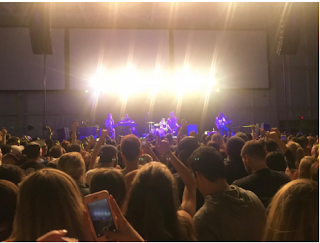 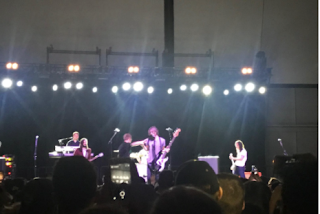