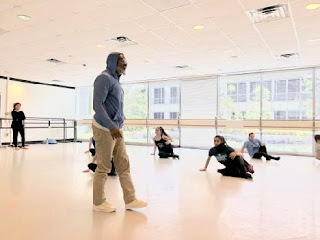 
Raphael Xavier, a professional hip-hop dancer, visited Stockton University’s campus on Friday, April 6th to teach students hip-hop’s signature dance moves. The culture of hip-hop was said to be started in New York in the 1970s with the inspiration of “street dancing” styles. Hip-hop dancing became extremely popular after being seen in well-known movies and in pop culture at that time. Raphael explained in more detail how the culture of this dance started, “It was mainly the concept of hip-hop that started the culture. Where a DJ brought in different elements including the dance, DJ, graffiti writers, and the rappers all together in one space, all elements combined created one conglomerate which started the hip-hop culture.”

Raphael Xavier taught students dance moves like the corkscrew, where the foot hits the back of the knee, forcing the body to fall forward, and the hands catch the fall followed by the body unwinding as it turns.

A lot of the moves seen in original hip-hop dance correlates to political tensions happening at that time. Another dance move that Raphael Xavier taught students was the wrist roll, which was a dance move that was influenced by the political Black Power Movement symbol of the fist. The wrist roll was shown to be putting the hand in a fist near the head, rolling the wrist and meeting the other hand for a clap.

Raphael Xavier discussed how the Civil Rights Movement and hip-hop is related “Music from that time period [1970’s], had bands with just Black musicians and when Puerto Rican musicians became involved in the development of this hip-hop music, it changed the rhythms to be more percussive, which then brought a broad range of audience and cultures. This music broke cultural barriers. The music triggered hip-hop dancing, something about it made you move. With what was going on politically in that time period, like racial tension, the dance reflected that because the people were a part of that.

The dance move called the macho-man, both hands are above your head, and that symbolizes African Americans surrendering to the police.” Raphael Xavier came to teach students a hip-hop dance class, but the students took a lot more than just the dance moves away with them when they left the dance studio. After learning the true symbolism of hip-hop dance, many students agreed they had a deeper appreciation for hip-hop culture and a better understanding of the history of hip-hop.

Posted by AdaptiveAC at 9:30 AM