Ospreys Learn ‘Politics of Divination’
BY SHANNON JOYCE
Recently, a professor visited Stockton University to discuss his book about divination in the contemporary world of finance.
Dr. Joshua Ramey, Assistant Professor of Philosophy at Grinnell College, wrote Politics of Divination: Neoliberal Endgame and the Religion of Contingency. He lectured about topics in the book, especially divination. The Oxford Dictionary defines “divination” as “the practice of seeking knowledge of the future or the unknown by supernatural means.” Diviners are “called upon by leaders to help make decisions in the face of uncertainty,” he explained.
Divination has been practiced for centuries and is still used today for serious purposes, even in the United States. For example, in some states, a tied election result is legally decided by “the draw of a card from a deck,” as Dr. Ramey explained. Major Wall Street firms also use divination by regularly employing mediums and psychics for research contributions.
“We need to ask ourselves whether we can really have a democracy, have a society based on popular sovereignty . . . when so much of our lives are controlled by the power of investors,” Dr. Ramey stated. Divination is in the hands of few financial speculators with a profit motive “indifferent or hostile to social or ecological needs,” he specified.
Regarding the risks associated with today’s financial speculation, he said it “is not really making a fortune, but . . . opening or closing the future for some people rather than others.”
Dr. Ramey visited Stockton because he was invited by Dr. Privitello, Coordinator and Associate Professor of Stockton’s Philosophy and Religion program. The two met in graduate school and have been friends for almost 20 years.


If anyone is interested in learning more about Dr. Ramey’s research, his book can be purchased from several major retailers, such as Barnes and Noble, Target, or Amazon. 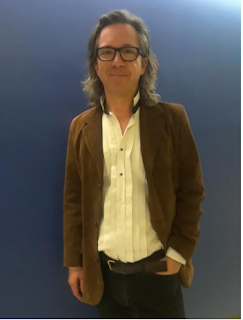